I selected three items from the kitchen of our home.

First is a stoneware piece, circular, open, with a base, covered in a black and grey unpatterned glaze, made of a coarse whitish clay.  It is approximately 12.5cm in diameter with a 3cm lip.  The underside has a legend pressed into it that states "bennington potters bennington vermont *1627 ya".  It is relatively heavy, but I don't have a scale to weigh it on.

Next is a ceramic object that is vaguely dome-like with a circular base attached.  The ceramic is not coarse.  It is covered with a brown glaze.  It is open-topped, with a lip.  The dome is also breached on two sides with oval openings.  The interior of the dome at the base has undulations that are circular, but the center is flattened.  The base is 8cm in diameter, while the open top is 5cm in diameter.

Finally, there is a ceramic piece that is a hollow sculpture 7.5cm tall with a 2.5cm irregularly-shaped base.  This artifact has the shape of a bird with neck outstretched vertically.  The body and head are of a black glaze, the beak is yellow, and the eyes white dots.  The beak is sculpted wide open, and there is a hole in the center of the oral region.  The base of the object is also open.  Due to the hollow interior, it's difficult to assess the coarseness of the material used to make the item, but the surface of the glaze is very smooth throughout. 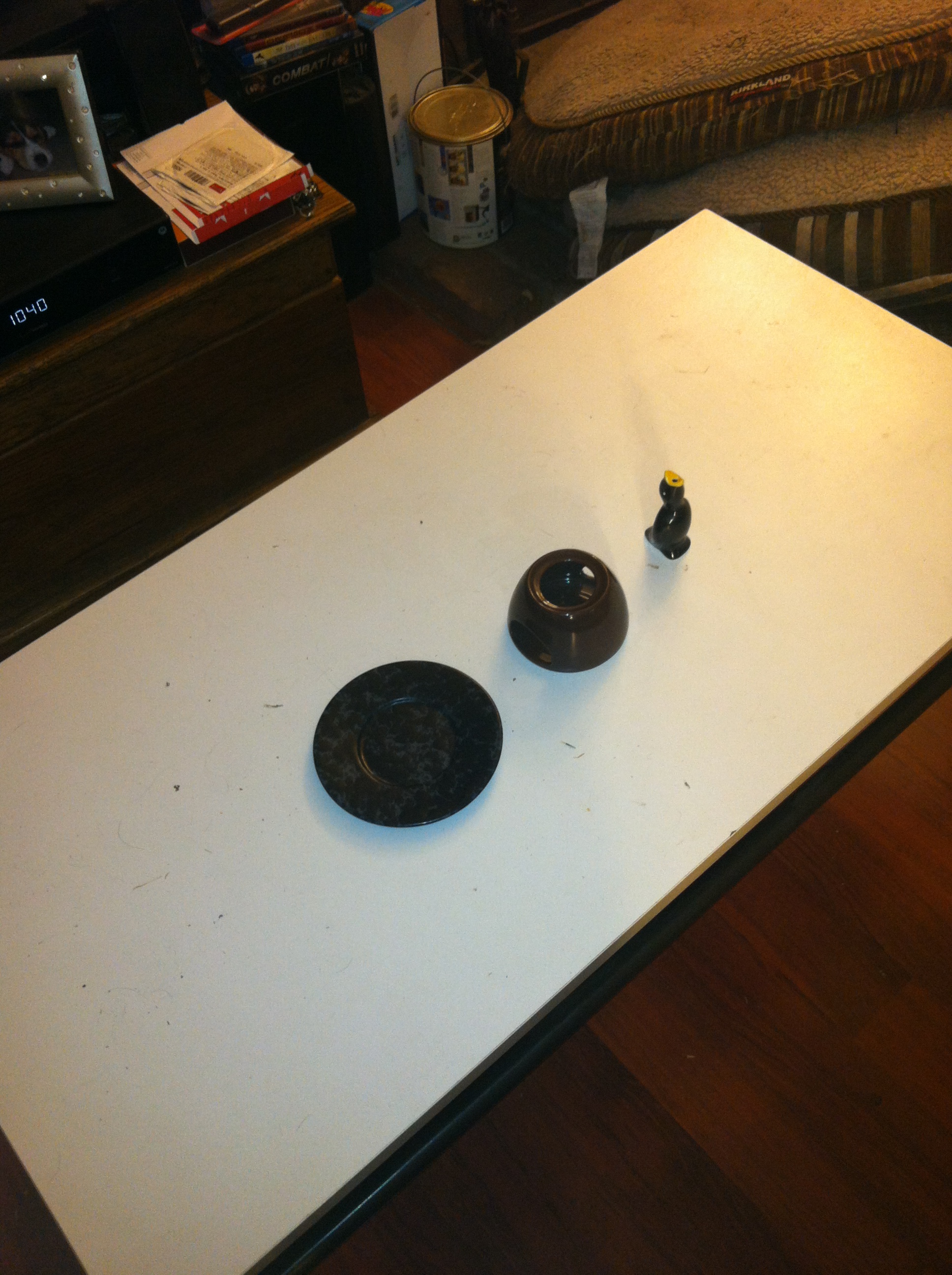 In this photo, item one is left and down, item two is in the middle, and item three sits right and up.

Clearly, the first artifact is some form of plate.  The indentation in the center might be used to catch fluids, but that seems unlikely due to lack of depth.  However, it might be possible for it to hold some sort of thick sauce, while the band around the center might hold some other items to dip, such as chunks of bread or vegetables.  Another possibility could be honey in the center, with pieces of fruit on the periphery.

The second item might be some kind of candle holder, though liquid wax would pour through the ovals near the base.  It's unlikely to have been some form of pedestal to present an item due to the opening at the top.

(In reality, the plate is a teacup saucer, the brown object is a base intended to keep warm a small chocolate fondue, and the standing bird is a pie whistle.  But if you'd never seen them before, how likely would you be able to guess their functions?)